If you have travelled all the way from New Zealand you need a tour that is tailored to you. For this reason all our New Zealand tours are customised. In advising on their content we consider the time that you have available, any family involvement here and the sites that you personally consider important. 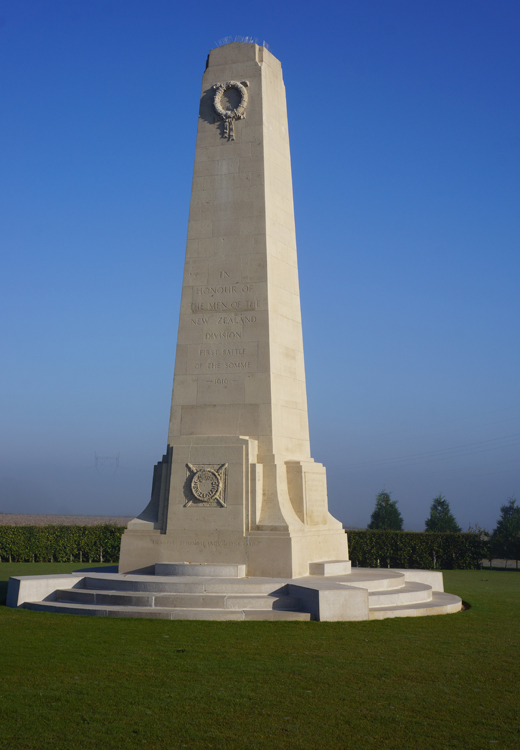 On 15th September 1915 the New Zealand Division lined up between High Wood and Delville Wood, near the village of Longueval. Despite the heavily cratered boggy ground the troops fought up hill towards the village of Flers. The attack was a complete success, but the New Zealanders did not stop there. For the next three weeks they continued to push forward though heavy rains and constant shelling had turned the already saturated ground into a quagmire. 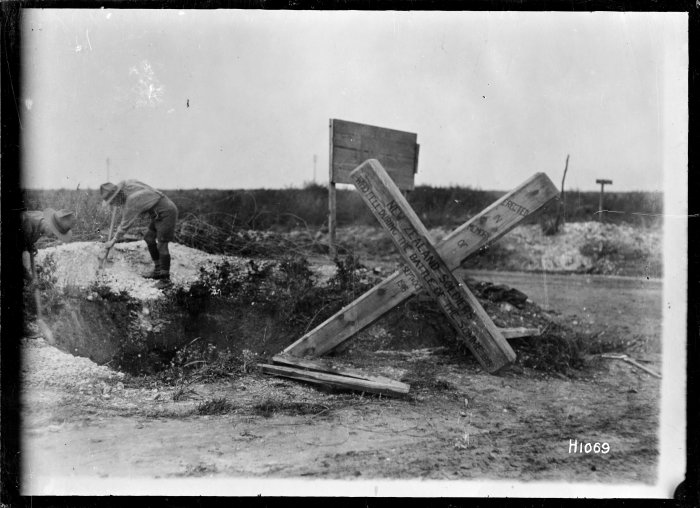 In 1918 they returned to erect a cross here in the memory of the men that they had lost two years earlier. The memorial was later replaced by the stone one at the top of this page.

On the morning of the battle, the New Zealanders had amassed in Caterpillar Valley before climbing the ridge to Longueval. Caterpillar Valley Cemetery is on that ridge overlooking the valley. There are 125 New Zealand graves here.
The screen wall on one side of the cemetery has eleven panels which bear the names of over 1,200 New Zealanders who fell during the Battle of the Somme in 1916 but have no known grave.
In 2004 the remains of a New Zealand soldier was exhumed from here and taken home to New Zealand. He lay in state at the Parliament Buildings and an estimated 10,000 people paid their respects.

On the 11th November 2004  he was laid to rest in the New Zealand Tomb of the Unknown Soldier in the National War Memorial in Wellington.

New Zealand’s part in the Battle of Arras 1917

Underneath Arras are vast quarries used for many centuries to provide stone for building in the town. From as early as 1916 a plan was conceived to connect these quarries and use them to shelter troops before the battle. At the same time tunnels from the quarries would be dug into no man’s land so that, at the start of the battle, troops could emerge under the German lines in relative safety. This job fell to the New Zealand Tunnelling Company.

The New Zealanders dug whole rooms as well as interconnecting tunnels and fitted the quarry with electric light and running water. 24,000 soldiers ate, drank and slept here. A 700 bed hospital complete with operating theatres was created. 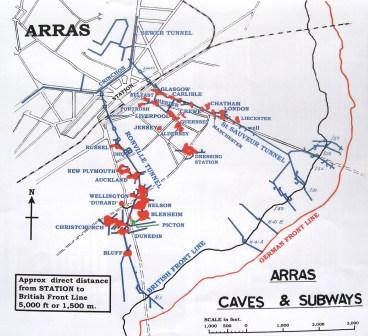 Map of tunnels under Arras

The chambers were identified using names of home towns. The system was mapped and each tunnel labeled.
On 5:50 am on the 9th April 1917 the troops lined up at the exit tunnels, climbed up to the front line and went into attack.
Wellington Quarry is now open to the public and is well worth a visit regardless of your nationality.

The Commonwealth suffered 100,000 casualties during the Battle of Arras of which nearly 37,300 were killed or missing. Their memory is commemorated at Faubourg d’Amiens Cemetery and on the Arras Memorial.

In the March 1918 the Germans launched what became known as the Spring Offensive. At this time New  Zealanders played a major roll in the defence of the region around Bapaume. Ultimately Bapaume was lost and the Germans pushed onto Albert. However on the 8th August of the same year the Commonwealth troops turned the tide and pushed the Germans back. 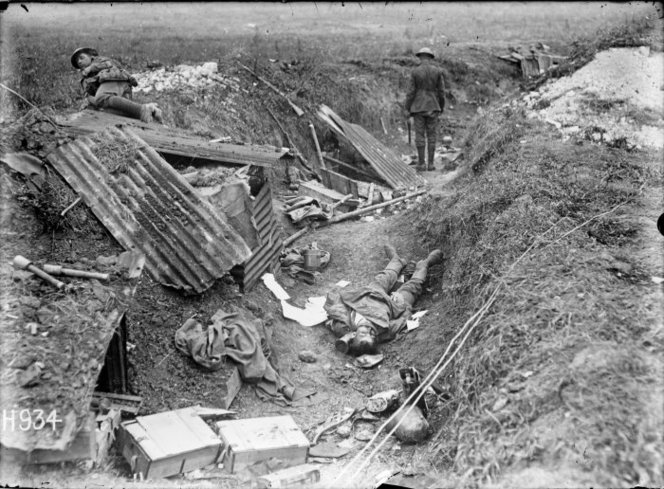 On 24th August 1918 the New Zealanders found themselves in the same region this time on the winning side liberating the village of Grévillers.

Today Grévillers Cemetery is the site of a memorial to the 450 New Zealanders who were lost in the Somme area during 1918 and have no known grave. Many of the soldiers buried in this cemetery are known to died of disease as the great flu pandemic swept the battlefields and the world, claiming over 25,000,000 lives.